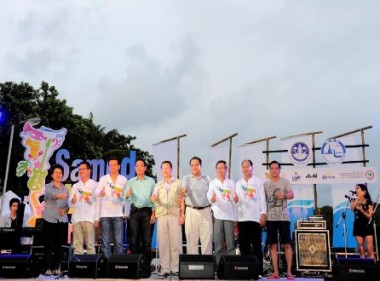 Koh Samet (Thailand) – August 21, 2013 – A delegation of more than 200 senior Thai tourism industry executives and media, led by H.E. Mr. Somsak Pureesrisak, Minister of Tourism and Sports, visited the area affected by a recent oil spill and pronounced it as being “almost completely cleaned up.”

Mr. Suraphon Svetasreni, Governor of the Tourism Authority of Thailand, also accompanied the group to inspect Ao Prao Beach, on Samet Island, in the province of Rayong, about 300 kms southeast of Bangkok.

The two-day visit between August 17-18 was initiated by the Tourism Minister as part of the efforts to rebuild confidence and ensure a quick return of visitors, both domestic and foreign.

The oil spillage, caused by a rupture in a pipeline operated by PTT Global Chemical, a subsidiary of the national energy company, the Petroleum Authority of Thailand, occurred on July 27, 2013. It washed up primarily on Ao Prao beach.

Hundreds of clean-up teams, including the oil company’s staff, navy personnel and volunteers, were deployed around the clock over a week as part of an intensive operation to mop up the oil and restore the area to its pristine beauty.

Now that has been done, the Ministry of Tourism and Sports decided it was time to show the results to the Thai tourism industry.

Over the two days, the tourism delegation visited the entire area, met with local owners of various hotels, lodges, restaurants, and shops and participated in a discussion about how to prevent such accidents from occurring again.

TAT arranged for a number of domestic tour operators from the Northeast Thailand provinces of Nakhon Ratchasima, Buriram, Si Sa Ket and Surin to meet with the Rayong tourism industry sellers to bring some immediate domestic business back.

In the evening, the entire group enjoyed a “Party on the Beach” under the theme “We Love Samet”. The so-called ‘Gok Gak’ tour (“Gok Gak” has no direct meaning in English, but can be loosely translated to reflect a feeling of being “easy-going” or “relaxing”).

The PTT has offered compensation to the affected accommodation places and other tourism industry companies for the damage caused. Some of the affected lodges and hotels are also being used by PTT staff to manage the clean-up operations.

TAT Governor Mr. Suraphon thanked all those who had played an excellent crisis management role in restoring the area. “Everyone responded professionally and quickly, and I am truly gratified to see how quickly the area has been cleaned-up. We in TAT will now work under the guidance of the Minister to ensure a return to business as usual as soon as possible,” he said.

Local business operators said they had experienced a 30% drop in occupancy, with local visitors mainly postponing their trips to another weekend, while foreigners cancelled and went elsewhere. Many of the lodges are offering discounted rates to induce visitors to return.

Three accommodation premises and resorts located directly on Ao Phrao Beach; such as, Ao Praw Resort, Lima Coco and Le Vimarn Resort, have shut down temporarily and are planning to re-open in October 2013, in time for the start of the Thai tourism high season.

In addition to being a popular tourist spot, Rayong is a major agricultural area known for popular Thai fruits; such as, durian, mangosteen, rambutan, long gong, salacca, and pineapple. It is also a major supplier of fish to the region.

The beautiful Samet Island, located 6.5 kilometres from the mainland, is popular with budget tourists, offering numerous activities; such as, diving, jet skiing, and kayaking whereas Rayong is known for its orchard tours, agro-tourism, waterfalls, caves, golfing, herbal tours and traditional markets. 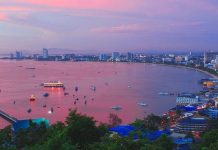