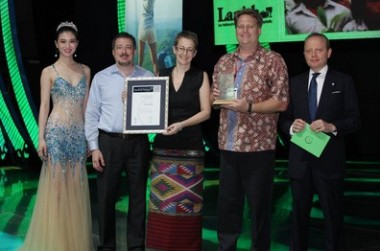 Hainan (China) – April 28, 2014 – The Pacific Asia Travel Association (PATA) is pleased to congratulate the Lao National Institute of Tourism and Hospitality (Lanith) on winning the prestigious World Travel & Tourism’s (WTTC) Tourism for Tomorrow’s People Award 2014. The award recognizes excellence in the development of capacity building, training, and education to build a skilled tourism workforce for the future.

The Tourism for Tomorrow’s People Award recognizes the partnership of private, public or non-profit organisations which are dedicated to developing core skills needed within the travel and tourism industry. The focus of the partnership is on training or education at either high/secondary school, college/tertiary education or those from outside established educational systems.

Lanith demonstrated a broad commitment to the “Tourism for Tomorrow” principles in its programmes by showing how the curricula for its Passport to Success skills training regimen and two-year Lanith Diploma education coursework are largely based on industry needs, as seen in the project’s initial research, with interviews of hoteliers and tour operators, through implementing the two capacity-building streams.

Lanith’s two year Diploma in Tourism and Hospitality, supported by Luxembourg Development (LuxDev), began as a pilot programme for around 300 students in June 2012 and now has a new college in Vientiane, Lao PDR with sixty fulltime students. The curriculum was formally accredited by the Lao Ministry of Education and Sports in 2013.

Its Passport to Success training program, started in 2011, offers short vocational courses in areas such as customer service, kitchen management and food production. Now the biggest industry training program in Lao PDR, nearly a thousand hospitality and tourism staff have studied subjects such as customer service, food and beverage operations, management and communications.

Lanith has previously been recognised by PATA with the Pacific Asia Travel Association 2012 Grand Award for Education for its Passport to Success skills training programme.