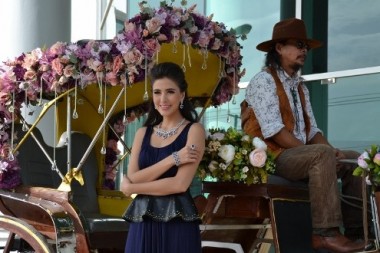 Chanthaburi (Thailand) – November 24, 2013 – The Thai eastern province of Chanthaburi is to capitalise on its well-known domestic popularity as the “Kingdom of Gems” to hold a World Gems Show from 6 to 15 December, 2013, at the Chanthaburi Gems and Jewellery Centre.

The show is intended to promote and encourage local gems and jewellery dealers and entrepreneurs to expand into global markets, as well as to boost the local economy by positioning the new Chanthaburi Gems and Jewellery Centre as one of the province’s top tourist attractions.

Located 240 kilometres from Bangkok by road, Chanthaburi is on the eastern Thai border with Cambodia and will play a major role in the future development of the Asian Highway links to southern Cambodia.

It is especially famous for its red gemstone known as the Siam Ruby. This jewel, along with topaz and amethyst, is found in many of the provincial gem shops, especially in the heart of the city. Visitors can also learn the techniques of preparing and setting the gemstones into exquisite designs.

According to Mr. Kriengdech, Thailand is a leader of skilled labour in the gems and jewellery industry in the ASEAN region.

He said the idea of holding the World Gems Show is in line with the government’s national development policy to make Chanthaburi into a gems and jewellery trading hub. A special economic zone will be established to help Thailand prepare for the AEC 2015 by improving transportation and the interconnectedness of the region.

At the show, there will be a wide range of activities; such as, an exhibition of precious and rare jewellery, especially famous rubies, sapphires and topaz, more than 100 jewellery and gem stores, gem-cutting competitions and demonstrations, OTOP products, etc.

Sririta Jensen, a famous Thai model, along with Miss Thailand World 2013 and the first and second runner-ups for Miss Thailand will be modelling jewellery. There will also be a 3D theatre to narrate the history of Chanthaburi.

In addition to being known as a centre for gem mining, Chanthaburi is also blessed with rich, verdant forests and scenic waterfalls. The Chanthaburi River flows through the provincial capital. Quiet fishing villages and peaceful beaches are not far from town, making Chanthaburi the ultimate get-away-from-it-all Thailand province.

As the province was briefly occupied by the French during the end of the 19th century, their influence can be seen in the architecture of many local buildings; such as, the largest Catholic cathedral in Thailand. The province has a sizeable Christian population, mainly ethnic Vietnamese who migrated to Thailand in the 20th century.

According to available figures, visitor arrivals to Chanthaburi totalled 1,559,370, in 2012, an increase of 2.67% over the year 2011. Visitors had an average length of stay of 2.31 days and an average daily expenditure of 1,420.62 Baht per person, generating tourism revenues of approximately 4.213 billion Baht.