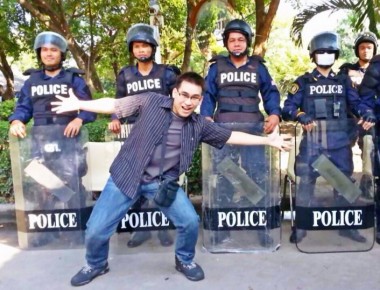 Bangkok (Thailand) – November 28, 2013 – With so many countries issuing travel advisories, warning travellers to be cautious during their visit to Thailand, it would appear on the surface that Thailand is under siege. However this is not the case and as this reporter can testify the streets in Bangkok are all peaceful and calm. Not to whitewash the issue – yes there are ongoing street protests which are politically motivated and have to-date been entirely peaceful. The protest area is in the heart of historical district of Bangkok known as Rattanakosin, near the Democracy Monument. The rest of Thailand, including all beaches and resorts, are unaffected. Other protest sites in Bangkok have been located in areas that are not normally visited by tourists (they include government buildings and TV stations). Traffic in the city has become more compact due to road closures. Avoiding these areas, traffic is running as normal as is possible, which is often quite slow during peak times.

Today I left my residence to go from downtown Bangkok to the CBD area of Sathorn to attend a wedding and was pleasantly surprised. A journey which would normally take 40-45 minutes, took only 25, giving you an idea that traffic was running better than normal. I saw absolutely no evidence of any problems for locals or visitors alike.

Twenty-three countries have issued special travel advice on Thailand urging citizens visiting the country to be cautious, as protest leaders offer to explain their cause to international observers.

The Bangkok Post reported this morning that the Foreign Ministry yesterday unveiled the results of a survey of 68 countries, which identified 23 that are warning travellers about political protests in Thailand.

The countries that have issued travel advisory notices include the United States, the United Kingdom, France, Japan, China, Taiwan, South Korea and Singapore.

Only South Korea had updated information to its citizens on Tuesday, while the United States, France, Italy, Sweden, Denmark, Norway and China, last amended their information for travellers on Monday, according to the ministry.

Most of the 23 countries have issued general warnings telling their citizens about ongoing political protests in Thailand, although a number have specified areas to be avoided, including the US which suggests Americans should be careful in areas near government agencies. Brazil has cautioned its nationals against visiting the Grand Palace and areas surrounding protest rallies at Democracy Monument.

Diplomats from 56 countries and representatives of six international organisations were at the ministry on Tuesday for a briefing on the political situation after the government decided to impose the Internal Security Act (ISA) across all districts of Bangkok. Sihasak Phuangketkao, permanent secretary for foreign affairs, told the diplomats why the ISA had been invoked and urged them not to alarm potential visitors to the country by making sure any travel advisory statements are factually correct.

Mr Sihasak said the 23 countries that have issued travel warnings have not prohibited citizens from visiting Thailand, but merely told travellers to avoid protest locations.

Protest spokesman Akanat Promphan said protesters will not try to shut down Suvarnabhumi airport to force the government out of office.

Thailand’s TTR weekly reported that tens of thousands of pro and anti-government demonstrators massed in rival rallies in Bangkok on Sunday.

Police estimated that about 90,000 opponents of Prime Minister Yingluck Shinawatra and her crisis-hit administration had gathered in three sites in the city’s historic centre, calling for her government to be toppled.

Across the city, some 50,000 pro-government “Red Shirts” had arrived late Sunday at a suburban football stadium, in a rally to support Yingluck.

Both groups have vowed to remain in the capital in a city which has witnessed several bouts of unrest since divisive former premier Thaksin Shinawatra — Yingluck’s brother — was deposed in a military coup seven years ago. Aerial footage showed tens of thousands of people crammed into the streets Sunday leading to the city’s Democracy Monument, which has become the focal point of boisterous but so far peaceful anti-government protests.