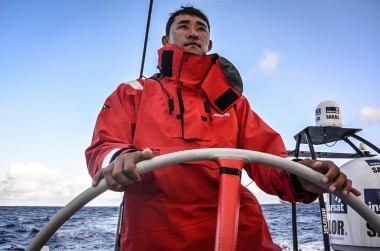 Alicante (Spain) – June 5, 2014 – Dongfeng Race Team’s Chinese rookies came face to face in the mid-Atlantic with a whale in a taste of the kind of larger-than-life experience the Volvo Ocean Race 2014-15 will throw at them.

They have already sailed through a storm, faced up to 40 knots of wind and French skipper Charles Caudrelier says he has navigated “one of the darkest nights I’ve known with absolutely no moon at all and barely any visibility”.

He continued: “We had the scariest experience to date during the night when we came so close to hitting a whale, so close we could hear it breathing.

“You can smell whales in the air but in the pitch black you can’t tell where they are. You can’t sense them in the water because very often when whales are at the surface it’s because they’re sleeping so it’s a nasty surprise for both the whale and us!

“I just held my breath knowing how close we were to potential danger but, thankfully, we didn’t hit it – we just had a near miss.”

The crew, including four sailors from China who have never sailed across an ocean before, are roughly halfway across the Atlantic after leaving Newport, Rhode Island for Lorient in Brittany, France on May 30. That’s a trip of 2,800 nautical miles heading north-east.

For the team’s new try-out Onboard Reporter Allan Lan, it is proving a real baptism of fire.“Are we here to prove we are the toughest men?” he asked. “We are just human.”

Despite their hardships, the red boat is still on track to reach the Brittany coastal port of Lorient on schedule around June 10.

Meanwhile, the all-female crew of Team SCA arrived safely at their training base in Lanzarote in the Canary Islands on May 29 after sailing from Newport.

It marked the culmination of some very testing offshore sailing for them having sailed in the opposite direction on April 24, crossing the Atlantic Ocean for the first time, and arriving in Newport on May 8.

They were hampered by some minor technical issues on the way home but overall reported themselves delighted with some serious preparation for the Race proper which begins with the Alicante in-port race on October 4.

In all they completed two transatlantic passages, 7,200 nautical miles and spent 30 days at sea.

Another boat with Newport in their sights are Team Alvimedica who left Lisbon, Portugal on May 30 and are crossing opposite to Dongfeng Race Team towards the Rhode Island sailing-crazy town which is their home port.

On board for the trip is mentor Stu Bannatyne who is offering his experience of six Volvo Ocean Races to boost a rookie crew headed by Americans Charlie Enright and Mark Towill.

Amory Ross, the triallist onboard reporter for Team Alvimedica, saw duty in the 2011-12 edition on board PUMA and has been impressed by the up-and-at-‘em attitude of Enright’s young crew.

“We practised ocean gybe after ocean gybe in 25 knots of wind and a big ocean swell. There were too many to remember just how many, but there were lots,” he reported.

Bouwe Bekking’s Team Brunel team sailed home from Lanzarote to the Netherlands in early May, also completing their 2,000 nm qualifier for the Volvo Ocean Race in the process.

They took line honours in the RORC North Sea Race http://www.rorc.org/2014-race-news/rorc-north-sea-race-team-brunel-show-their-ability.html and won it overall under the IRC handicap.

Then their boat was christened last Sunday in the home port of Amsterdam. They have a new website too. http://www.brunelsailing.net/.

Abu Dhabi Ocean Racing have been spending plenty of time in the gym building up fitness and strength. They are working out twice a day right now at their team base in Cascais, Portugal.

But they too have been doing their fair share of sailing and covered around 300nm offshore this week.

It is time now to lift Azzam, their Volvo Ocean 65, out of the water and prepare it for the transatlantics to Newport and back to the United Kingdom scheduled at the end of June. 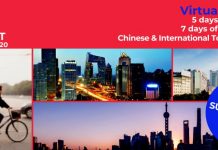