Home Exploring Pathum Thani: 4 Things to See and Do

Exploring Pathum Thani: 4 Things to See and Do 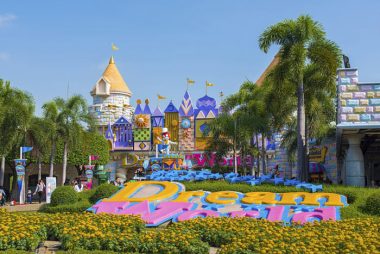 The province of Pathum Thani has a fascinating cultural history: during the reigns of King Narai the Great and King Rama II, it was a place of sanctuary for the Mon people fleeing the Burmese War. The settlement was originally called Sam Khok before being changed to Prathum Thani, a name bestowed upon it by King Rama II which means “lotus flower town” after he visited the area in 1815 and was offered lotus flowers by the villagers. Today, it is a thriving residential area and a hub for culture, the arts, and higher education. Below are some of the attractions that can be found there:

1. Dream World
With its proximity to Bangkok, Dream World is easily the most popular amusement park for city dwellers, just 10 minutes north of the Don Mueang International Airport. Opened in 1993 and occupying about 25 hectares of land, it’s a whimsical destination filled with attractions and rides for all ages, including 3 roller coasters—one of which holds the distinction of being the first hanging roller coaster in the continent.

The park is divided into 4 distinct zones: Dream World Plaza resembles Disneyland’s famous main street USA, serving as the park’s main entrance. Dream Garden surrounds the bigger man-made lake on the property, and it contains nature-themed attractions such as the 7 Wonders of the World and the Bicycle Boat ride, as well as the cable car station that can take you to the third zone, Fantasy Land. This fairy-tale themed section contains Sleeping Beauty’s Castle, the Fantasy Garden, a 4D adventure theatre, and the Hurricane ride. Finally, Adventure Land occupies the park’s rear, a futuristic zone where all of the thrill rides are located. This includes the Haunted Mansion, a rapids ride called Grand Canyon, two of the park’s roller coasters and the ever-present Viking.

2. Thammasat University
This public research university has campuses in Tha Phra Chan, Rangsit, Pattaya, and Lampang Province. It is the second oldest institute of higher education in the country, and officially the national university of Thailand. The Rangsit campus is a bike-friendly area that houses many of the university’s undergraduate programs. Attractions here include sprawling public parks such as Star-Gazing Bridge, where many locals come to celebrate the annual Loi Krathong festival, and Thammasat Park, which contains a sculpture courtyard and easily walkable foot paths.

There are also 3 shopping malls on campus under the supervision of the university: TU Dome, Inter Zone, and the Tops Daily Supermarket. Transport within the expansive campus is convenient: there are free shuttle vans with stops all over the university grounds, as well as passenger vehicles called songthaew to transport students and guests alike. To fully explore the area, we recommend checking into a hotel close to the campus grounds by searching “ที่พัก ธรรมศาสตร์ รังสิต” which means Thammasat Rangsit Accommodation.

3. Thai Wake Park Lumlukka
With sunny weather all year, Thailand is one of the best places for wakeboarding in Southeast Asia. It has over a dozen full-sized parks already in operation. Thai Wake Park is a cool escape from the city, with branches in Lumlukka, Pattaya, and another one to open in September 2019 at Rangsit. The Lumlukka branch in particular is just 45 minutes from the center of Bangkok, and about a half hour by car from both Suvarnabhumi and Don Mueang Airports. Opened in 2009, they offer a challenging full cable wakeboarding course for professional riders and free lessons in wakeboarding and wakeskating for those new to the sport. With an in-house restaurant and bar as well as its own hotel called the Ride ‘N Lazy, it’s easy to spend a full day or even a weekend here. When you’re ready to go pro, hit up Intensity Pro Shop to pick up your own technical gear; they carry reputable brands such as Ronix, Remote Wakeskates, Double Up, and Liquid Force.

4. Talad Thai
This massive 200-acre wholesale market is one of the biggest in Asia, with a whopping 15,000 tons of fresh produce coming through daily. Open 24 hours, the market has a mind-boggling variety of fresh produce available, from meat, chicken, and poultry products to flowers and decorative plants. The well-organized space is divided into sections, appropriately named after what is being sold there: for example, the Orange Market sells every type of orange, tangerine, or citrus fruit you can imagine, while in the Mixed Fruit Building you’ll find farmers selling golden yellow mangoes, cantaloupes, apples, papayas, bananas and much more. Frankly, it’s a little dizzying, but worth every minute of your time to explore and sample the available delights. Check it out if you’re ever in the area.

Regardless if you’re traveling alone, with friends, or with family, there’s a lot to see and do in Pathum Thani. It’s a great place to stay in if you want to try out a new adventure, take a look at the sights, or simply get a good glimpse of the comings and goings of the locals.