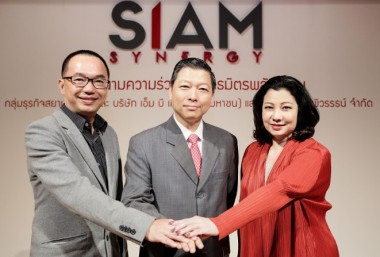 Bangkok (Thailand) – September 30, 2015 (travelindex.com) – Siam Synergy allies, led by MBK PCL., Siam Piwat Co., Ltd., and the Siam Square Business Group, have signed a historic memorandum of understanding under the name Siam Synergy to strengthen the alliance in the district, including the public and private sectors and affiliated agencies, and to push forward various projects to propel the Siam District towards becoming Thailand’s key economic and commercial center and the hub where trendy lifestyles, world-class shopping experience, art, and entertainment converge under the concept The Metropolis of Diverse Modernity. The signing ceremony was honored with the presence of H.E. Ms. Kobkarn Wattanavrangkul, Minister of Tourism and Sports, who presided over the ceremony.

H.E. Ms. Kobkarn Wattanavrangkul, Minister of Tourism and Sports, said, On behalf of the Ministry of Tourism and Sports, it is a great pleasure to preside over the signing ceremony today, which serves as the beginning of a major collaboration of the Siam Synergy allies and demonstrates the power and the commitment of the allies in the Siam District to become as a major force in developing the tourism industry by propelling and fostering the continuous growth of this district which is considered the hub of Bangkok that is vital to the economy of the nation.

Entrepreneurs of large, medium, as well as small enterprises, along with public and private agencies, are the powerful force that has, for over 50 years, strengthened and nurtured the Siam District into a commercial hub at the heart of Bangkok. This disctrict has generated tremendous revenues for the tourism industry and has presented an extraordinarily diverse range of products and services that satisfy every need. Today, the chief allies have joined forces under the name Siam Synergy, demonstrating their commitment to enhancing the competitive capacity of our tourism industry and creating an opportunity for growth and strengthening the position of this commercial district as one of the world’s most vibrant shopping, art, and entertainment hubs, she said.

Blessed with a unique identity, the Siam District lies at the center of Bangkok and has symbolized the beginning of new things and Thailand’s economic and commercial prosperity up until the present day. The location of the District has made it the hub of various transportation systems, which have been continuously improved since 1964, further to the appeal of the District. As a result, Siam has been selected as a tourist destination of choice and considered the top-of-mind commercial hub among visitors and investors, both domestic and international.

Representing the Siam Synergy alliance, Mr. Suvait Theeravachirakul, Director and President of MBK PCL stated, Every entrepreneur of every business type in the Siam District, including public and private sectors, are considered the major force that has fostered the continuous growth that the District is enjoying. This year is an opportune moment for the initiation of a partnership among leading entrepreneurs and public and private sector organizations to unify the area stretching from the Chaloem Phao Junction to the Banthat Thong Junction and the Hua Chang Bridge. As a first step, the signing of the memorandum of understanding under the name Siam Synergy will boost the image of the Siam District as the urban center where latest trends, world-class shopping experiences, art, and entertainment converge. The principal objective of this partnership is to strengthen the entrepreneur network and enhance the competitive capacity of the District as Thailand’s key economic and commercial hub. This synergy will also help preserve and promote art and culture so that the District can continue to shine as a most-preferred destination among both Thai and foreign travellers.

Mr. Boonsong Srisawangnet, Vice-president of the Siam Square Business Group, revealed, Based on the latest information, the Siam District has demonstrated a continuous growth. It has very strong economic and commercial potential and can be considered one of Bangkok’s golden locations, comparable to major avenues in other countries such as the Ginza in Japan. The Siam District is considered a vital connecting hub of Bangkok, linking various mass transit systems, including Bangkok’s most advanced and modern transportation. As a result, on a daily basis, the Siam District is visited by over 550,000 commuters and tourists, on average, which helps generate revenues and activities within the area. The synergy within the District will not only prepare the District for the advent of the AEC but also directly benefit the economic development of the country.

Ms. Chadathip Chutrakul, Chief Executive of Siam Piwat Co., Ltd. remarked on the development plans of the Siam Synergy allies, stating, One of the most important factors that has continually attracted both local and international travelers to Siam as the center of entertainment and as a lifestyle destination is the fact every enterprise in the area, both public and private, have focused on developing products and services to be in line with new lifestyle needs that continuously evolve together with global trends. To ensure that Siam keeps its place as the most preferred destination in the hearts of visitors the allies of Siam Synergy have planned various collaborative projects to develop the District. These include the improvement of the Sky Walk, the establishment of Siam as Bangkok’s art district, joint marketing activities among members and allies to provide superior and exciting experience through promotions to attract tourists and stimulate spending, as well as improve the levels of security within the District.

Under this major partnership, the Siam Synergy is ready to launch and implement various projects, namely:

– The improvement and expansion of the Sky Walk: The Sky Walk connecting to the National Stadium Station of the BTS and the Pathumwan Intersection will be improved and expanded to become linked in order to facilitate commuting and connect key tourist attractions within the Siam District. In addition, the Sky Walk will be improved with a new design and serve as an outdoor art exhibition venue, rendering it a hub of creativity and a must-see tourist landmark.

– The improvement of the security within the Siam District: To bolster safety and help commuters within the Siam District, the security standard will be lifted through various programmes such as the exchange of databases for joint surveillance between public and private organizations within in the area to prevent and intercept potential dangers. There will also be the sharing of knowledge on security protocols between the security teams of the major shopping centers in the District, as well as a joint on-site drill for the security teams within the District. More importantly, a uniform security standard for the entire area will be established and implemented.

– Siam Discovery renovation project by Siam Piwat: With an investment of over 4 billion baht, Siam Piwat is planning a facelift for Siam Discovery to reinforce its position as the leader of innovation by breaking all the rules and creating a new chapter in the history of the retail business, following its historic innovation of Siam Center two years ago, which has enjoyed tremendous success and brought much innovation to Bangkok.

– Area development projects by the Siam Square Group : These will include the Suan Luang Square project, in which the area around Suan Luang and Sam Yan will be developed under the theme the center of delicacies and life’s joys and serve as a model of a commercial community that retains its unique shop houses despite its more modern and improved appearance. Also included will be the Centenary CU Park and the Centenary CU Street projects, which entail developing the area to maximize the public benefit by adding green areas to serve as new lungs for Bangkokians, create pleasant environments for communities, and provide recreational space for the public. In addition, the areas under these projects will also contribute to the urban eco-system by acting as natural water-draining zones that help drain rainwater to prevent flooding and waterlogging.

– MBK Center renovation project: With an investment of over one billion baht, the MBK center will be revamped to better accommodate the lifestyle of modern consumers. The overhaul will include both interior and exterior works, with an all-new expanded and improved storefront to create a modern image for the center. In addition, popular restaurants and leading fashion stores will be featured to offer a diverse range of products for visitors.

The partnership of the allies in the Siam District, which include both public and private sector organizations as well as other affiliated agencies, under the name Siam Synergy is an crucial step forward that will reinforce the strength of the Siam District, which has stood tall with pride in contributing to Thailand’s economic prosperity all through the years, and mark the Siam District out as a key economic and commercial area and one of the most vibrant lifestyle hubs in the world. 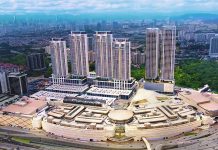 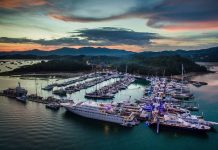 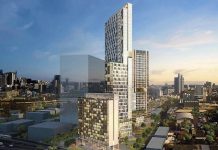