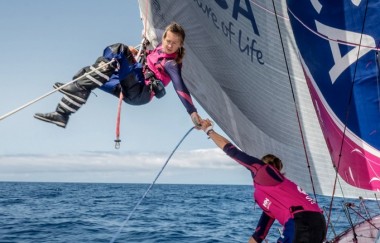 Bouwe Bekking’s crew, who completed the 650-nautical mile course in 57 hours and 39 minutes, secured first prize in a race against two of their Volvo Ocean Race rivals – the Spanish-backed boat skippered by Iker Martínez, and the all-women’s crew of Team SCA.

“The race was really fun, with various conditions”, said Team Brunel’s Lithuanian crew member Rokas Milevicius. “We had strong wind, light wind, no wind – and we sailed up and downwind”.

Featuring seven islands, and a host of tricky transition zones, the course is a notoriously turbulent one – and Rokas reckons that the added experience of his team played an integral role in the win.

Meanwhile, in a fight to the death for the silver spot, the Spanish-backed boat narrowly pipped Team SCA to the runner-up place.

Newly-named runner-up skipper Iker Martínez and his crew made it back to Lanzarote in 59 hours and 40 minutes – just 10 minutes before their rivals.

And despite losing out on victory, the Spaniard was delighted with the performance of his team. “It’s been a good surprise”, he said.

“We came here to see where we’re at, and to establish a base upon which to start learning. The truth is that we are better off than what we first thought”.

It was back to the drawing board for Team SCA though, who admitted that after months of tough training, their first competitive race in the new boat was a real learning curve.

“We have a long way to go”, said American sailor Sally Barkow. “It just highlights what is important in an offshore race, so I think everyone now has a better concept of what we need to get better at”.

But third place is not the end of the world, according to her teammate, Abby Ehler, who believes that the team still have reason to be confident.

“This is what we’ve been training for the whole time – to race”, she said. “We were able to hang in there and give the other boats a run for their money. I think we can be pretty happy with ourselves”.

As the teams were landed back into Lanzarote, Dongfeng Race Team continued their pre-race preparations with a session of T’ai Chi.

The ancient martial art, famous for its numerous health and well-being benefits, originates from the city of Shiyan, one of the Chinese-backed team’s platinum partners.

French skipper Charles Caudrelier sees it as the perfect way to unite his multi-cultural – and multi-lingual – crew.

“It’s something we all enjoy”, he said. “It’s interesting for the western crew to discover new things like this everyday with our Chinese sailors”.

The trip – which under strict Volvo Ocean Race rules was not a race – saw the boats navigate some tricky weather conditions, including 40 knot winds, and thunder and lightning storms.

“We are really on our toes”, said ADOR navigator Simon Fisher, during the crossing. “It’s really, really relevant race training, for sure”.

And Team Alvimedica, in particular, will be pleased to spend some time on dry land following long spells at sea in recent weeks – but their preparations were well worth it, according to their Onboard Reporter Amory Ross.

“Heaps of tough miles, and each of them valuable in so many ways”, he wrote. “I think it’s safe to say that everyone feels they were extremely well spent”.

The voyage saw Abu Dhabi Ocean Racing’s skipper, Ian Walker, return to his hometown – and the respective boats will remain on the south coast Aberdeen Asset Management’s Cowes Week, which runs from August 2-9, before embarking on the Sevenstar Round Britain and Ireland Race the following day.

The two teams will also be joined by Team SCA, the Spanish-backed boat, and Dongfeng Race Team. 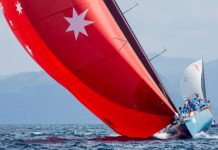 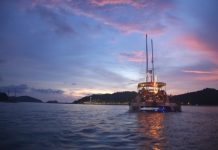