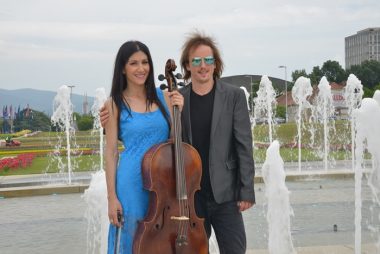 Ana announced with great pleasure her concert in Zagreb, on June 30, as a part of the Summer festival called „Veceri na Gricu“ . Ana and Oliver are recording a new song, for which they will also film a new video.

Ana also introduced her traditional concert „Greeting the summer“ taking place in Dubrovnik, on the day of the summer solstice, June 21, which is also World Music day. It has become a traditional summer event organized for the fifth time as it is her own project, always attractive for tourists, located od the highest point of Dubrovnik, with stunning views overlooking the historic city, in the amphitheater Excelsa real estate, and we expect there a real spectacle.

Oliver Poole, called by the BBC – „”A True Master of his Instrument” is going to be Ana’s guest at Srd . He performed exclusively at David Beckham’s global launch of Haig Club but he is also very engaged in charity work.

Croatian cellist Ana Rucner, awarded with 28 local and international awards for tourist videos, recognized as a great talent in Croatia but also abroad, will be a guest at the concert of famour Spanish tenor Jose Carreras, who is coming to the Croatian town Pula. He will have a concert at a beautiful ancient Arena on July 23, at 9 pm. It will be a great honour for her especially as this will be his last world tour.