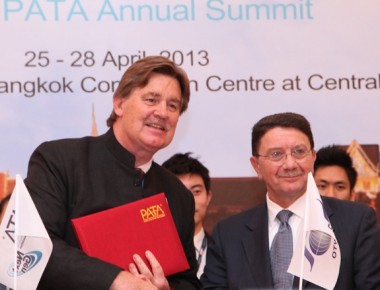 Bangkok (Thailand) – April 26, 2013 – Advancing economic diversification, cultural and environmental preservation through tourism are the key objectives of a new Strategic Partnership signed between UNWTO and the Pacific Asia Travel Association (PATA) on the occasion of the PATA Annual Summit (April 26) in Bangkok, Thailand.

The lasting support to the development objectives and the positioning of tourism as a central contributor to economic growth and sustainability in Asia are at the centre of the Strategic Partnership, which was signed April 26 by UNWTO Secretary-General, Taleb Rifai, and PATA CEO, Martin Craigs.

“We are proud to further deepen our relationship with PATA, a leading voice of tourism in Asia Pacific”, said Taleb Rifai, attending the PATA Annual Summit in Bangkok, Thailand. “In providing market intelligence, setting global standards and joining our voices to advocate for the value of tourism, this partnership will help the continued growth of tourism in Asia and the spreading of its socio-economic benefits in one of the most dynamic regions of the world,” he said.

PATA CEO Martin Craigs, said: “On behalf of PATA members, public and private, large and small across the 17 time zones and 104 destinations, I am delighted to initiate this strategic partnership with UNWTO.”

The PATA CEO welcomed Taleb Rifai to the PATA Annual Summit and 62nd AGM in Bangkok. “PATA’s advocacy of balanced business building and our embrace of the Complete Visitor Economy align us closely to the UNWTO’s global mission,” he said.

The Strategic Partnership includes a series of projects, such as a PATA/UNWTO forum on marketing and joint research. The first research initiative will address air connectivity and its impact on tourism in the Asia-Pacific region. The study is expected to be implemented already this year, in collaboration with the Tourism Promotion Organization for Asia-Pacific Cities (TPO). Other topics include visa facilitation, taxation, aviation policies as well as consumer and enterprise protection.

The UNWTO/PATA partnership builds on a track record of successful joint activities, such as the annual UNWTO/PATA Forum on Tourism Trends and Outlook, launched in 2007 in collaboration with the Hong Kong Polytechnic University and the Municipal Government of Guilin in China.

About UNWTO
The World Tourism Organization (UNWTO: www.UNWTO.org), a United Nations specialized agency, is the leading international organization with the decisive and central role in promoting the development of responsible, sustainable and universally accessible tourism. It serves as a global forum for tourism policy issues and a practical source of tourism know-how. Its membership includes 154 countries, 7 territories, 2 permanent observers and over 400 Affiliate Member.