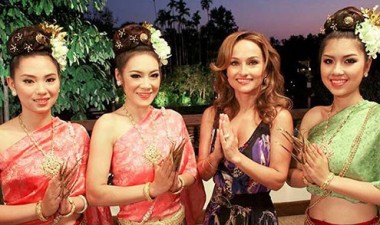 New York (USA) – August 10, 2014 – A stunning TV series focussing on Thailand’s culinary and cultural delights has won top honours at the Gold Adrian Awards 2013 conferred annually by the Hospitality Sales and Marketing Association International (HSMAI). The series, “Giada in Paradise: Thailand” won the award in the public relations category, making it the third year in a row that an entry from Thailand has taken the top spot in this category.

Supported by the Tourism Authority of Thailand (TAT) New York and Los Angeles Offices, “Giada in Paradise: Thailand” shows Ms. Giada De Laurentiis, an Italian celebrity chef enjoying a glamorous once-in-a-lifetime adventure across Bangkok, Phuket, Krabi and Chiang Mai. It was first broadcast on Cooking Channel Television on 21 April, 2013, from 15.00-16.00 hrs, with an audience of about 6 million. It was replayed for the entire month of May 2013.

The HSMAI’s Adrian Awards Reception and Gala was held on 24 February, 2014, at the New York Marriott Marquis Hotel. The Awards recognise inspiring best practices in sales and marketing for the hospitality industry, including lifetime achievement; award-winning approaches to advertising, public relations, and digital marketing. HSMAI received more than 1,200 submissions globally for the 2013 Adrian Awards. From the entries, HSMAI presented 46 Gold Adrian Awards in Advertising, 87 in Digital Marketing and 130 in Public Relations.

Mr. Thawatchai Arunyik, TAT Governor, said, “TAT is happy to have backed this extremely high-impact TV series which conveyed a very powerful message about Thainess, especially our unique culture and cuisine to a very top-notch audience in the United States. We are deeply honoured by the award and extend our thanks to the organisers and all those who were involved in the decision-making process.”

The TV series covered the following:

Four Seasons Resort Chiang Mai – Thai Massage: Thai massage also known as yoga massage has been around for centuries and aims to release stress and leave one feeling rejuvenated and relaxed. The massage follows pressure points along the body and involves intense stretching.

Elephant Life Experience – Chiang Mai: See nature’s biggest land mammal up close and personal at this beautiful elephant conservation camp outside of Chiang Mai. Guests are given the opportunity to ride the elephant through the camp, see them in their natural environment, and end the day with a picnic lunch or high tea.

Sunday Market – Walking Street – Chiang Mai: A trip to Chiang Mai wouldn’t be complete without a visit to one of its many food markets. Enjoy the energy of the city’s bustling nightlife at the Sunday walking street market located in the old walled city. This weekly market features local artisans and food vendors from 4 p.m. to midnight.

Thai Feast – Chiang Mai: Experience the cuisine of Northern Thailand at this dramatic resort modelled after the ancient Lanna Kingdom.

Beach Dinner – Phuket: Dine under the stars with your feet in the sand at Phuket’s Amanpuri Resort. Dinner by candlelight features traditional Southern Thai dishes like green mango salad, fish in banana leaf, and local lobster grilled on the beach.

Fruit Carving – Phuket: Students from around the world have learned Kae Sa Lak (carving) from the Siam Carving Academy based in Bangkok, Thailand. Fruit and vegetable carving has been an art form in Thailand for seven centuries. These beautiful edible arrangements are displayed during festivals and at many Thai restaurants.

Buddhist Temple: This Chiang Mai temple welcomes tourists from around the globe.

The Hospitality Sales and Marketing Association International (HSMAI) is a global organisation of sales, marketing, and revenue management professionals representing all segments of the hospitality industry.