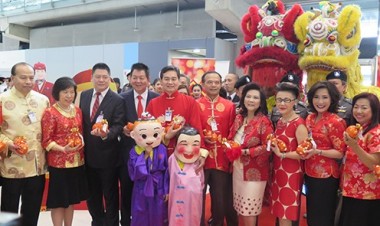 Bangkok (Thailand) – February 19, 2015 – In a move to demonstrate the country’s enthusiasm and willingness to welcome and facilitate Chinese tourists, Thailand organised a special ceremony to meet and greet 500 passengers arriving at Bangkok’s Suvarnabhumi Airport with China Southern Airlines flight CZ357 from Guangzhou and Thai Airways International flight TG8085 from Shanghai.

Marking the special welcoming ceremony was an impressive lion dance performance. High-ranking delegations from the Tourism Authority of Thailand (TAT), Airports of Thailand (AOT), Immigration Bureau of Thailand, Association of Thai Travel Agents (ATTA), and the Thai-Chinese Tourism Alliance Association (TCTA) were also present to offer a warm welcome and give a token gift to passengers of flight CZ357 at the Airport’s Arrival Gate D4 and flight TG8085 at Gate D6.

The two flights are among a total of 890 flights carrying around 305,000 passengers from several cities in China as well as from Hong Kong. These flights are scheduled to arrive at four international airports in Thailand – Bangkok, Phuket, Chiang Mai and Krabi – during the lunar New Year holiday period from 18-24 February, 2015.

Mrs. Srisuda Wanapinyosak, Director of East Asia Region, said, “The number of Chinese tourists expected to visit Thailand during the lunar New Year holiday 2015 represents a 49 per cent increase over the same period in 2014, and are estimated to contribute about 6.9 billion Baht in revenue, a year-on-year growth of 58 per cent, to the Thai economy. The travel expenditure of Chinese tourists in Thailand is around 22,600 Baht per person per trip.”

To facilitate the expected high number of Chinese tourists during the lunar New Year holiday 2015, Suvarnabhumi Airport is now specially decorated with a Chinese-style pavilion and designated screens displaying a welcoming message in Chinese. Special visa-on-arrival lanes have been designated for Chinese tourists, including three (3) specially assigned “Chinese Lanes” and five (5) “Premium Lanes”. In addition, Chinese-speaking interpreters are stationed at several areas throughout the Airport.

In February, 2015, TAT estimates Thailand to attract 530,000 tourists from China and generate 22.93 billion Baht in revenue, representing an increase of 47 per cent and 54 per cent, respectively.