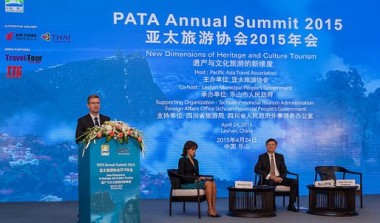 The three-day event included a one-day conference, the PATA Executive Board and Committee meetings, and Annual General Meeting. PATA had previously held various events in China including the PATA 60th Anniversary & Conference in Beijing, the PATA Travel Mart 2013 in Chengdu, and the PATA Annual Meeting 2014 in Zhuhai; however this was the first annual conference held by the Association in the central and western area of China.

The choice of Leshan, Sichuan, China for the PATA Annual Summit 2015 represents the main theme of the Association’s activities this year in promoting secondary destinations to encourage the dispersement of tourists. The destination has much to offer today’s travellers including the world heritage sites of Emei Mountain and the Leshan Giant Buddha.

In his welcome speech at the conference, PATA Chairman Scott Supernaw noted, “Most travellers may not realise that China has 47 UNESCO World Heritage Sites, ranking second in the world. These are sites and destinations ready to be discovered and recognised for their authenticity and beauty.”

The three-day event began with the PATA Youth Symposium on the morning of April 23, prior to the start of the PATA Annual Summit 2015. Under the theme “Technology and Social Media for Tourism”, the Symposium was held at the Sichuan Tourism School, Huanglongxi campus in Chengdu, China.

On the evening of the same day at Yingbin Square of Emei Mountain, the launch ceremony for the establishment of the PATA-Leshan Mountain Tourism Demonstration Base was held with the aim to help showcase the destination’s rich mountain tourism resources to the international travel and tourism community.

The one-day conference on April 24, under the theme “New Dimensions of Heritage and Culture Tourism”, explored the challenges between increasing tourism growth and the appropriate management of heritage and cultural sites and attractions, and brought together a diverse line-up of international and local speakers.

Delegates also witnessed the signing of a Memorandum of Tourism Strategic Cooperation between PATA and the Leshan Municipal People’s Government. The memorandum aims to enhance the communication and cooperation between the two organisations, in the areas of marketing, research and human capital development. In addition, the two organisations have agreed to annually hold the Emei Summit Forum as a showcase of international cooperation.

The Association was especially honoured to have Xu Jing, Executive Secretary of the General Assembly and the Executive Council, World Tourism Organization (UNWTO) and Regional Director for Asia and the Pacific, UNWTO, and Hans Dencker Thulstrup, Programme Specialist for Culture a.i., UNESCO Beijing Office, China, deliver the keynote address, which was followed by a question and answer session moderated by Sharanjit Leyl, Presenter, BBC World News.

In his speech, Mr Xu highlighted the importance of culture and heritage in tourism, noting that 40% of global tourism movements was motivated by cultural awareness and understanding. Meanwhile, Mr Thulstrup discussed the importance of World Heritage sites in relation to tourism and how UNESCO works with countries, specifically China, in the conservation and management of World Heritage sites.

At the conference, topics ranged from the Successful Management of Heritage Sites with case studies of Angkor Wat, Great Wall of China and Sigiriya; Balancing the need for Visitation and the Appropriate Management of the Authentic and Natural Heritage and Cultural sites; The Dynamic of Today’s Global Traveller; Marketing the Competitive Destination of the Future; Social Media in China; Travel Trends in Asia; The Future Outlook, Innovation and Technology in the Travel Industry; and The Conscious Traveller, Putting Purpose into Practise.

PATA welcomed 350 international and local delegates to the PATA Annual Summit 2015, with delegates coming from as far away as Australia, Bangladesh, Indonesia, Malaysia, Guam, Thailand, and the United States, to name a few.

After the conference, delegates were given the opportunity to visit the world heritage sites of Emei Mountain and the Leshan Giant Buddha, and experience the natural beauty and culture of Leshan first-hand.

Presentations from the speakers will be available soon on the PATA website. 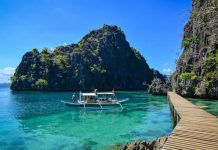 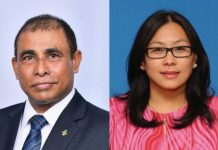 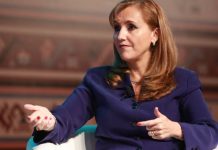