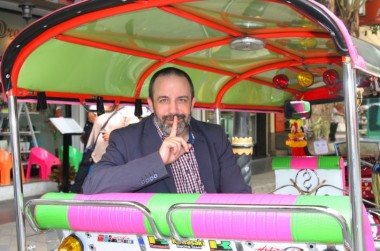 Bangkok (Thailand) – May 5, 2015 – Ashley Madison is a dating website that allows two individuals, already in a relationship or married, to interact with each other on a messaging platform. It is a social network specifically aimed at giving people the opportunity to have an extra-marital affair. If both parties are interested, they can arrange to meet offline and go from there.

Sign up for everyone if free, and straight away you are able to view every profile in the world. Members are able to chat via Instant Messenger, Video Chat, and SMS with other members that are interested in them, with the eventual goal of meeting in real life. Members can also send each other virtual gifts. The site runs on a credit-based system, whereby men pay for such credits so they can speak to women; women can contact men for free. The credits system is designed to allow members to come and go as they please; you simply pay for what you use and if some months you are less inclined to use it, you still have the credits waiting for you when you come back. The price for a hundred credits in Thailand will be priced at 1,500 baht.

The idea came to the company’s founder whilst he was waiting to board a flight from Toronto in 2001. Neil Biderman recognized an opportunity after reading an article by a female journalist who predicted the end of online dating altogether. Having been on ten blind dates and finding that three of the men were already married, she had argued that online dating could not truly work because so many were insincere about their true relationship status. Noel got to thinking about this population of people who wanted to have an affair, the ones who were not looking for love or Prince Charming. Ashley Madison was born, aimed at removing that dishonesty altogether, bringing transparency to any sexual or intimate interaction between two people. It is a space where from the get go the expectations between the two individuals are honest and up front: both want a discrete, no-strings attached affair. Present in 46 countries worldwide and available in 28 different languages, there is a mix of married and single members on the website. Ashley Madison does not discriminate against allowing singles to use the site.

The level of secrecy and discretion that users have access to is what makes Ashley Madison the best culprit to plan the perfect affair. Any profile photo used can either be hidden completely, blurred or parts of the face blocked, so no one can see your identity. The onus is on you to share photos to potential partners if you wish. If you are interested in someone and would like them to have access to your private photos, you can give them a ‘key’; you can also revoke their access to these photos at any given time. Members can pull the plug on their profile completely at any time if they suspect their partner has suspicions. Ashley Madison recommends that you set up a separate email together so that the chances of being found out are minimized greatly.

With the lessons learned from other dating sites, Ashley Madison ensures that women are not harassed and bombarded by men saying unpleasant things to them; the fact that men have to pay for credits to contact women means that every message sent is thought through, as it is paid for. Women using Ashley Madison in turn feel there is a level of sophistication and politeness that comes through their flirtations with interested men. Nonetheless, with the growing number of female members in Ashley Madison, whereby in many parts of the world the male to female ratio is equalizing, it may be in future that women will also have to buy credits to contact men.

There is also a feature on the website that allows for extra-martial affairs to cross boarders. As the site is global, its ‘Travelling Man’ or ‘Travelling Woman’ feature offers a unique opportunity for travelling men and women to meet like-minded members when they visit different cities. For instance, one could be visiting Kuala Lumpur for a few days; through the site they would be able to plan all their extra-curricular activities before they arrived. The site would allow you to select the type of person you would like to meet and the language they should speak. Following this, one message gets written and sent to as many as thirty people of your choice. Wait for the responses and your trip is made complete by the possibility of meeting someone who shares your interests and who wants the perfect affair.