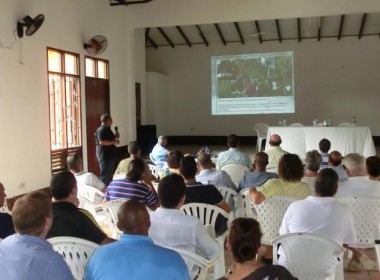 Victoria, Mahe (Seychelles) – May 10, 2013 – On Saturday afternoon, May 4, 2013 at 3:00 pm, members of the public gathered at the meeting hall of the Beau Vallon District Administration for a second round of consultations on the proposal to rehabilitate what has been called Beau Vallon’s “Golden Mile,” a popular and well-frequented part of the Beau Vallon beach. To present the plan and to discuss with those present were Minister Mr. Joel Morgan, the Minister for Home Affairs and Transport; Minister Alain St. Ange, the Minister for Tourism and Culture; and Minister Christian Lionnet, the Minister for Land Use and Housing.

Those present were introduced to the proposals which included in a visual presentation the plans to create an enhanced pedestrian walkway or promenade; a public recreational park; enhanced public parking for visitors to the area; a new police station; a new fire station; recreational facilities to cater for beach volley ball, tennis, and basketball; a stage area for public gatherings and entertainment; kiosks for artisans and refreshments; and in the second part of the presentation, new walkways and again improved public parking, that would connect the “Golden Mile” to areas just beyond to the Mare Anglaise beach area.

The “Golden Mile” is a stretch of beach at Beau Vallon which has long been a well-visited area and which is located between the current and recently-renovated Coral Strand Hotel and the beach restaurant, La Plage. The plan to rehabilitate the beachfront would as well cater for and enhance services currently not provided for and would add value to this area for residents and visitors alike.

On April 28, 2012, the idea to enhance the area was discussed at a meeting of the Seychelles Hospitality and Tourism Association (SHTA) with the Ministry of Tourism&Culture. Subsequently, draft plans were drawn up and presented to the stakeholders from Beau Vallon in a first meeting late last year.

In a statement made after Saturday’s meeting, Minister Joel Morgan said that the future of Beau Vallon would be best safeguarded by everyone working closely together. ”With this proposal, government is opening new possibilities and proposing new joint actions. I believe that everyone should come together to enhance Beau Vallon and make it the tourism and recreational area it deserves to be. Together we need to look at a comprehensive approach to improve transport and other infrastructure, to provide for better leisure facilities for our people, improve law and order, and to upgrade the general environment and aesthetics of Beau Vallon. Everybody who is a stakeholder should take part in this responsibility, and we should come together as a team to make this proposal realizable.”

Those present at this latest public meeting were able to ask questions and offer their ideas where there were concerns about the project. Of concern were issues pertaining to the environment of the area, street lighting, pavements, how residents would be affected by an increase of construction in the area, increased volumes of people in the area, traffic congestion, and recreational facilities to name just a few.

During the meeting, it was made clear that public events such as Regatta, Bazar Labrin, SUBIOS, and other popular meetings and occasions would continue to be held at the recreational park location in the future, and as a result of the project, under more pleasant surroundings.

The public is invited to visit the website of the Ministry of Land Use and Housing [ www.luh.gov.sc/ ] to view the current proposal, which will be posted shortly for further comments or consideration.

A third meeting will be organized to provide an update on what was discussed and to present the changes made to the current proposal, where needed. 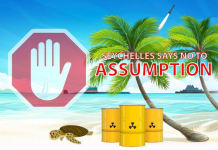