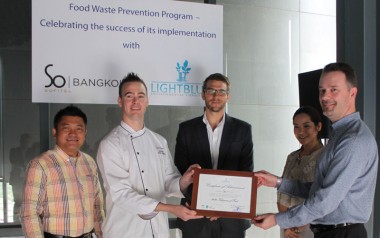 Bangkok (Thailand) – October 22, 2014 – Have you ever realized that many people in modern urban settings perceive food as something that can be easily disposed of, as long as it has been paid for? They tend to overlook the fact that this food has often required thousands of liters of water, quantities of chemicals, gallons of fuel to be transported (thereby releasing kilos of Co2), electricity to be stored, natural gas and substantial labour to be prepared, presented and finally disposed of. These people are not only consumers, but sometimes even food outlet managers or hoteliers.

According to the UN Food and Agriculture Organisation (FAO), roughly 33% of the food produced in the world for human consumption every year — approximately 1.3 billion tons — gets lost or wasted.

Conscious of the value of food and eager to conduct its business in a more responsible way, Sofitel So Bangkok has recently partake in an ingenious Food Waste Prevention Program with the support from LightBlue Environmental Consulting Co., Ltd., a Bangkok based hotel sustainability training and consulting firm. After weeks into the initiative, the hotel has seen noticeable improvements in food waste prevention, food cost reduction and practices in its key departments such as Food & Beverage and Kitchen. Upon the successful completion of this program which facilitated the hotel to save in many ways, this practice will continue as part of the hotel’s sustainable development.

“I was not 100% convinced in the beginning. LightBlue Environmental Consulting had to convince me first, and the project was then presented to the owner of the hotel who understood immediately the potential benefits” says Accor’s VP Operations Luxury Brands, S-East Asia.

The project consisted of a full week of audit to understand where food waste is coming from, where in the food chain it is happening (Spoilage, Preparation, and Guests), what the reason for discarding is and what main items ended up in the bins. For seven days, employees have been sorting, weighing, defining and recording Food Waste during breakfast, lunch, dinner and night shifts at each food waste generation point of the hotel, establishing a Food Waste baseline performance level (in grams of food waste per cover).

“At first I thought it was complicated and wasting our working time. We did not understand why we had to separate food waste. But then we received training about what were our mistakes in the past. Now before I throw something away I think twice whether the item could be used again or not” says a First Kitchen Agent Culinary of the Hotel.

Then a dedicated team composed of staff and managers from Kitchen, Food & Beverage, Stewarding, Human Resources, Engineering and Finance (The So Food Lovers Committee), took the program in its own hands and tested various initiatives for Food rescue, Food Cost reduction and improved practices in key areas.
“We went through a lot of changes together with LightBlue and hard work for recording food waste and make chefs and staff change the way they perceive the food and treat the food” says the hotel Culinary Designer (Ex. Chef).

The efforts were indeed worthwhile as the hotel managed to rescue 6’535kg of edible food, coupled with very substantial financial savings.

“Very few similar projects have been implemented so far across the industry. The hotel should feel proud to be part of this pioneer initiative. Within 5 to 10 years, most major hotel chains will understand the true cost of food wastage and will be controlling their food waste much more carefully”, predicts Benjamin Lephilibert, Founder and MD of LightBlue Environmental Consulting.