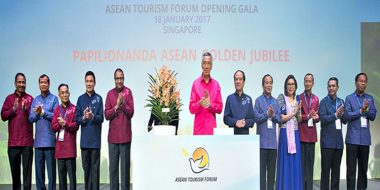 The campaign promotes the twin objectives of commemorating the 50th anniversary of ASEAN, and embracing the ASEAN region as a single and united tourism destination.

Ahead of its launch, ASEAN tourism ministers agreed that the objectives of the campaign were to raise tourist arrivals to the region to 121 million by end of 2017, up from 108 million in 2015. Tourism officials also hope to boost tourism receipts to USD83 billion and increase average length of stay to 6-7 days by encouraging tourists to travel to at least two ASEAN countries on each visit.

Fifty special tour packages – carefully selected by the 10 member countries of ASEAN — are the main draw of the tourism campaign, which is supported by globally recognised companies such as Mastercard and AirAsia.

The VisitASEAN@50 campaign comes at a time when tourism has been a star performer in Southeast Asia, rising from 42 million international arrivals to the region in 2000 to 108 million in 2015, according to numbers provided by the ASEAN Secretariat.

The proliferation of low cost airlines, rising living standards in the region and the proximity of mass markets such as China have turned tourism into a powerful workhorse, which now commands about 12.4 % of the ASEAN economy according to the World Travel and Tourism Council.

In his speech, Prime Minister Lee called for better connectivity within Southeast Asia and urged fellow member countries not to shy away from “less glamorous” tourism development tasks such as building new infrastructure, enhancing training and reducing red tape. Specifically he said he would like to see ASEAN strengthen air links, boost cruise tourism and develop tourism’s human resource skills.

During the launch on 18 January, a new hybrid orchid named Papilionanda ASEAN Golden Jubilee was unveiled to commemorate 50 years since the launch of the Association of Southeast Asian Nations (ASEAN) in 1967. The orchid was created from several different strands of genus from various ASEAN countries.

The Visit ASEAN@50 campaign will run until 31 December this year. Details on the 50 special tour packages are available on the campaign’s official website at www.visitASEAN50.com.