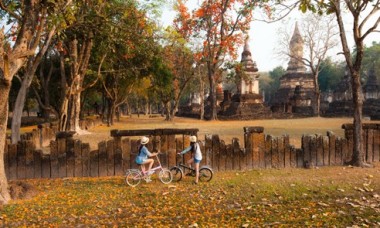 Bangkok (Thailand) – April 13, 2015 – French travellers have voted Thailand in the fourth place among their top five dream destinations in 2015, according to a recent survey by Paris-based global market research company, Ipsos. The rankings for dream destinations were decided on the basis of a total of 44,000 votes cast by French respondents, comprising both the general public and tourism-related operators. The USA was ranked #1 (31 per cent), Australia #2 (26 per cent), New Zealand and Canada #3 (22 per cent), Thailand #4 (19 per cent), and Mexico #5 (18 per cent).

This year, the average travel budget of the French travellers is expected to return to the same level as 2013 at 4,900 Euro per couple per year, after dropping to 4,800 Euro in 2014, according to Ipsos.

Mrs. Juthaporn Rerngronasa, Acting Governor of the Tourism Authority of Thailand (TAT) and TAT’s Deputy Governor for International Marketing (Europe, Africa, Middle East and Americas) said, “This great news reinforces Thailand’s reputation as a popular tourist destination among international travellers. It also clearly shows that Thailand’s ongoing efforts to promote the country’s tourism offers as well as to constantly improve the experiences of travellers have yielded a positive image for the country.”

France is Thailand’s fourth largest source of tourist markets from Europe, after Russia, the UK and Germany. In 2014, Thailand welcomed 632,242 French tourists, a 3.4 per cent increase over 2013. The growth continued in January this year, with a 7.8 per cent increase to 78,391 tourists from France.

In the first six months of 2014, a total of 312,460 French travellers visited Thailand and contributed some 20 billion Baht revenue to the Thai economy. Their average length of stay in Thailand was 17.32 days and their average expenditure was 3,699.87 Baht per day.

Mrs. Juthaporn Rerngronasa said, “For this year, we expect that a total of 657,500 travellers from France will come to Thailand to experience Thainess, our unique cultural assets that are becoming more famous around the world. Since earlier this year, TAT has been promoting the country under our 2015 Discover Thainess campaign to raise awareness of what the kingdom can offer, via marketing, promotions and an interactive online presence.