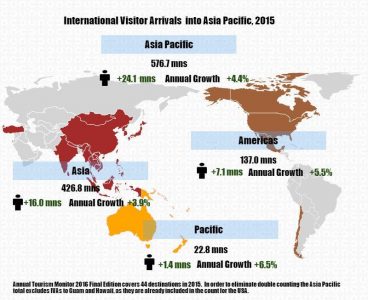 It shows that across the entire Asia Pacific region the top five performing destinations – by annual percentage growth – were led by Myanmar with growth of almost 52 percent. Japan, Chile, Thailand and Sri Lanka are the other nations achieving top five ranking.

These top five destinations added 91 percent of the net increase in foreign arrivals into the 44 destinations covered in this report between 2014 and 2015.

Across the Asia Pacific region as a whole, six destinations added more than one million additional foreign arrivals to their respective inbound counts in 2015 relative to 2014; seven added between 500,000 and just under one million while a further seven destinations added between 100,000 and 500,000 additional foreign arrivals to their annual inbound counts.

Of the 44 destinations covered, 32 showed positive increases in foreign arrivals in 2015.

PATA CEO Dr. Mario Hardy said, “The constant positive performance of the Asia Pacific region, as covered in this Annual Tourism Monitor, continues to highlight the diversity of products and services on offer as well as the demand for those experiences by international travellers.

“That brings with it a forewarning of the need for constantly improving tourism management procedures and protocols if we are to maintain delivery of a superior product and service.”

There were substantial differences in both growth rates and growth volumes at the sub-regional and destination levels. Across the Asia Pacific region generally the dominant origin-destination pairs were led strongly by the Greater China flows. Thailand and Japan recorded annual increases of 3.3 million and 2.6 million arrivals respectively from this increasingly influential source market.

The SARs of Hong Kong and Macao also added substantially to the overseas inbound count for mainland China – adding 3.3 million and 2.2 million additional arrivals respectively from those source markets between 2014 and 2015.

Early results 2016
According to the PATA report, the momentum of recent years continued through the early part of this year with a collective increase of 8.4 million international arrivals recorded by 35 destinations.

China continued to dominate the growth pattern in Asia Pacific in early 2016. Japan, Thailand and the Republic of Korea recorded significant increases of between 800,000 and almost one million additional arrivals from China.

Russia has shown a degree of positive growth into some destinations but the trend is weak and not uniform. Thailand and the Republic of Korea, for example, reported increased arrivals numbers of 84,700 and 20,700 respectively. However, of the arrivals counts to date this year from Russia into 24 Asia Pacific destinations, less than half are positive. Indeed, the losses far exceed the gains from this source market, resulting in a net loss into Asia Pacific of almost 1.2 million arrivals so far in 2016.

Dr. Hardy added, “International arrivals patterns are moving constantly through different cycles at various points of the year and it is important to understand where these are happening and to adjust market activity and resource allocations to those that are showing the strongest gains. In other words, destinations must engage in data-driven marketing. This is where the PATA Annual Tourism Monitor, together with other PATA forecasts supported by these data, becomes so critically important in today’s volatile marketplace.”

About PATA
Founded in 1951, the Pacific Asia Travel Association (PATA) is a not-for profit association that is internationally acclaimed for acting as a catalyst for the responsible development of travel and tourism to, from and within the Asia Pacific region. The Association provides aligned advocacy, insightful research and innovative events to its member organisations, comprising 98 government, state and city tourism bodies, 21 international airlines, airports and cruise lines, 68 educational institutions, and hundreds of travel industry companies in Asia Pacific and beyond. Thousands of travel professionals belong to the 40 local PATA chapters worldwide. The chapters organise travel industry training and business development events. Their grassroots activism underpins PATA’s membership of the Global Travel Association Coalition (GTAC), which includes ACI, CLIA, IATA, ICAO, WEF, UNWTO and the WTTC. The PATAmPOWER platform delivers unrivalled data, forecasts and insights from the PATA Strategic Intelligence Centre to members’ desktops and mobile devices anywhere in the world. PATA’s Head Office has been in Bangkok since 1998. The Association also has official offices or representation in Beijing, Sydney and London. 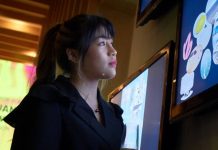 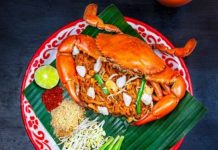 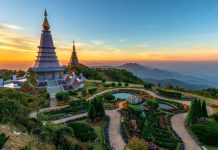