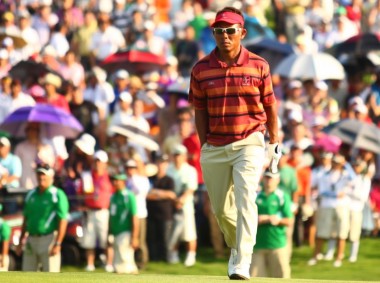 Guangzhou (China) – November 25, 2013 – Thongchai Jaidee will crown one of the most successful years of his career by making a record–breaking sixth appearance at the Royal Trophy. The charismatic Thailand star was an ever–present in the Asian Team as the first five editions of the Royal Trophy were played in his homeland, and was only absent from the Asian troops for the majestic event in the sixth edition, when it was played in the Sultanate of Brunei in 2012.

But he will make his sixth appearance at the Dragon Lake Golf Club in Guangzhou, People’s Republic of China, moving one ahead of Japanese sensation Ryo Ishikawa – who will line up alongside Thongchai next month – and European ace Henrik Stenson.

The Thongchai–Stenson rivalry is not limited to vying for the most Royal Trophy appearances. They also squared up in the Singles at the inaugural Royal Trophy in 2006, and then fought out one of the most memorable matches witnessed in the competition so far during a pulsating climax to the 2010 contest. Stenson holed a clutch putt on the final hole to square that match, handing Europe a nail–biting 8 ½ – 7 ½ victory.

Thongchai showed just how much it means to him to represent Asia, as he looked almost inconsolable after Stenson had clawed his way back from three down with eight holes remaining to square that match.

But it was a different story a year earlier, when the Thai golfer’s stellar performance helped Asia to their first Royal Trophy victory. He scored a maximum three points, teaming up with Prayad Marksaeng to devastating effect in the Fourballs and Foursomes before overwhelming Paul McGinley, Europe’s current Ryder Cup captain, 5&4 in the Singles.

That helped his team romp to a 10–6 win, and after missing out on Asia’s thrilling play–off triumph last year after the teams finished tied at 8–8, Thongchai is determined to help them retain the Royal Trophy for the first time.

Thongchai said: “Playing for Asia in the Royal Trophy for the sixth time is incredible and I am committed to be fully prepared and to play my heart out to secure a victory for our continent.

“Winning the third edition of the Royal Trophy in Thailand was one of the great moments of my career and an occasion I will always treasure.

“I am really looking forward to playing with Captain Y.E. Yang leading the Asian Team. He is an incredible competitor and has deep experience in the Royal Trophy. His partnering with K.T. Kim to clinch the victory for Asia in Brunei last year was fantastic. I am certain that he will be a great leader, that Vice Captain Zhang Lian-wei will add a lot of strategic strength to our effort and that our entire team will come together and give the Europeans unrelenting opposition.”

It is a competition that is clearly close to Thongchai’s heart given its roots in his country, and the fact that the spectacular sixteen-kilogram solid-silver Royal Trophy itself was donated by the His Majesty the King of Thailand.

He added: “The Royal Trophy is for Asia what the Ryder Cup is for Europe. I take enormous pride in this competition and we will not allow the Europeans to get their hands on the Trophy.

“The Royal Trophy was graciously donated by His Majesty our King of Thailand. To retain stewardship of the Royal Trophy in Asia for me is truly meaningful, it is a very important mandate and it is something I will fight for with all my ability and with the utmost determination.

“The Royal Trophy is our official and traditional championship between Asia and Europe. The first five editions were played in Thailand and I represented Asia in all of them. I have some great memories of our victory in 2009 but I also suffered disappointments like in 2010 – when it came down to my singles match with Henrik Stenson and in 2011 when the Europeans came from behind to defeat us at Black Mountain Golf Club in Hua Hin.

“This year I will do everything within my capacity to secure as many points as possible for our team. It would be an incredible celebration for our Asian Team to close the year defeating the Europeans for a second consecutive time – and to start a tradition of sending Europe back home without the Trophy.

“Our team is extremely strong and naturally I am very comfortable playing in Asia. We will be totally ready for the Europeans and we will beat them in China.”

No–one on the European Team will doubt Thongchai’s conviction, or his ability to deliver on his promises.

The five–times European Tour winner has just enjoyed his best year so far on that circuit, breaking into the top ten on their Order of Merit for the first time, finishing ninth overall.

He finished runner–up in the prestigious Volvo World Match Play Championship and at the BMW Masters – on Chinese soil, in Shanghai – and was third in the Volvo Golf Champions tournament, as well as registering a host of other top ten finishes.

That level of consistency has also helped him win the Asian Tour’s Order of Merit on three occasions, and he is another powerful addition to an Asian Team that already looks immensely strong, following the selection of Japan stars Ryo Ishikawa, Hideki Matsuyama and Hiroyuki Fujita.

“Thongchai Jaidee is a highly accomplished player and one of the most successful in Asian golf history. His record at the Royal Trophy speaks for itself,” said the Royal Trophy Managing Director, Lincoln Venancio.

“It is clear that Asian Team Captain Y.E. Yang is constructing an extremely powerful team in preparation for confronting José Maria Olazábal’s Europeans. It promises to be a tremendous match between Europe and Asia,” concluded Lincoln Venancio.

The seventh edition of the Royal Trophy will be played on 20-22 December 2013 at the Dragon Lake Golf Club in China’s most populous province of Guangdong in the southern region of the People’s Republic.

The Royal Trophy – Europe vs Asia Golf Championship is the official and traditional competition played between the two continents. The seventh edition of the Championship will be held at Dragon Lake Golf Club in Guangzhou, Guangdong Province in the People’s Republic of China on 20-22 December 2013. Asia and Europe will compete in a series of 16 foursomes, four-ball and singles matches. The Royal Trophy Players’ Committee is comprised of Sir Nick Faldo, Ian Woosnam OBE, José Maria Olazábal, Paul McGinley, Isao Aoki, Naomichi ‘Joe’ Ozaki and Jeev Milkha Singh.