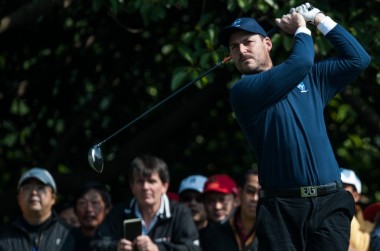 Hong Kong (Hong Kong SAR) – January 8, 2014 – The seventh edition of the Royal Trophy left a lasting impression on both sets of players who served up this latest golfing classic, even though defeat was hard to take for an Asian Team who saw their 7-3 lead evaporate in an incredible climax. Europe’s stunning Singles fightback eventually earned them a one point victory, 8 1/2 – 7 1/2.

This was certainly another vintage Royal Trophy, which added to its growing reputation as one of the most prestigious and exciting events on the golfing calendar. The plaudits were led by José Maria Olazábal, who added another glittering entry into his ‘Captain’s Log’ after leading Europe to victory against all the odds, just as he did when they achieved the ‘Miracle at Medinah’ in the latest Ryder Cup.

Olazábal has repeatedly declared his support for the vision of his legendary Ryder Cup partner Seve Ballesteros, who predicted the Royal Trophy would ignite a boom in Asian golf when the Competition was launched in 2006. Seve could see that dream becoming a reality before his tragic death from cancer in 2011. And Olazábal said this latest thriller once again fulfilled Seve’s great hopes for the Ryder Cup–style clash between Asia and Europe.

Olazábal explained: “I am always happy to be here, because it is always an honour to be involved in something created by my great friend Seve.

“I know I have said this many times, but it means more to me knowing Seve started this Event. If I can contribute towards making this Event grow into the Asia vs Europe equivalent of the Ryder Cup, the way he wanted it to, I am happy to help. Everyone can see what a great competition the Royal Trophy has developed into.

Olazábal was certainly not alone in singing the praises of the Royal Trophy. Double Ryder Cup winner David Howell, whose sensational singles victory over H.S. Kim – winning the final four holes when he found himself three down – launched the incredible swing in Europe’s favour. He clearly felt the Competition had taken another giant stride forward.

Howell commented: “This whole competition has been a fantastic experience for all of us. This is a wonderful event, between two great teams, and I love the idea that this competition brings two continents together, not just in terms of golfing combat but in the true spirit of sport.

“I certainly didn’t want to go down without a fight, and to actually win the last four holes and get the win was a real thrill for me. My heart was pumping so fast over those closing holes that I don’t know how I was able to hit the shots I managed to pull off.

“Everyone in those last six matches hung in, fought for everything, and played great golf, and it all turned out perfectly for us. You have to say something magical just happened out there.

“I have enjoyed every minute of it, and the Chinese people have been fantastic hosts. I would love to be part of it again when we defend the Royal Trophy, and I am sure everyone on our Team feels the same way.”

The eighth edition of the Royal Trophy will be held on 19-21 December 2014 at the 54-hole Dragon Lake Golf Club in Guangzhou, China’s third largest city.

About The Royal Trophy:
The Royal Trophy – Europe vs Asia Golf Championship is the official and traditional competition played between the two continents. The seventh edition of the Championship was held on 20-22 December 2013 at Dragon Lake Golf Club in Guangzhou, Guangdong Province in the People’s Republic of China. The eighth edition of the Matches will be held on 19-21 December 2014 and will remain at the 54-hole Dragon Lake Golf Club. The Competition features Asia and Europe competing in a series of 16 foursomes, four-ball and singles matches. The Royal Trophy Players’ Committee is comprised of Sir Nick Faldo, Ian Woosnam OBE, José Maria Olazábal, Paul McGinley, Isao Aoki, Naomichi ‘Joe’ Ozaki and Jeev Milkha Singh.