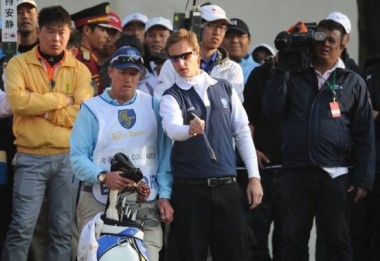 Dragon Lake (China) – December 28, 2013 – Nicolas Colsaerts emphasised just how much the Royal Trophy means to the players of Europe and Asia by admitting he had “flashbacks” to the painful 2012 defeat before clinching victory for his team this time in dramatic fashion.

The Ryder Cup star was one of the men beaten in the sudden death play-off that saw Asia clinch an unforgettable victory in Brunei, with K.T. Kim of Korea draining a birdie putt from 15 feet to settle the issue. Colsaerts had earlier hit his approach to within seven feet of the flag, but in classical ‘match play style’ his own birdie putt looked a lot longer once Kim had knocked his in.

The Belgian golfer’s attempt to prolong the play–off shaved the hole, and he admitted he was pleased to have a putt of less than two feet to complete Europe’s remarkable ‘singles fight back’ this time. With the score tied at 7 ½ – 7 ½ he beat Chinese ace Liang Wen–chong on the final green, and revealed that meant he could finally forgive himself for “letting his teammates down” in 2012.

That was a particularly harsh self–assessment, so there was an element of justice in Colsaerts sinking the winning putt this time. He said: “As it became clear that our match would decide who won the Royal Trophy I kept thinking about how I was in the same situation a year earlier.

“I had some nasty flashbacks to that birdie putt I missed to level the play–off, which is not what you want when the pressure is on. I kept telling myself you can’t let the team down, like I felt I did last year. It was hurtful to miss that putt and let Asia win the Trophy.

“This event certainly throws up its share of drama, and I don’t think it was destiny or anything like that but it certainly felt good this time to have a nice short putt to win my match and the Royal Trophy at the same time. When you have a great captain like José Maria Olazábal and all your teammates at the back of the green willing you on it’s pretty intense. That’s a great feeling.

“Everyone always seems to remember the guy who sinks the winning putt I guess, but this was a real team performance. We pretty much came back from the dead basically.

“People might point the finger at the Asians players and say they should never have let a 7–3 lead slip away down the stretch, but I don’t think that does credit to the great golf our players produced under real pressure.

“I haven’t felt my competitive juices flowing like that for a long time, and as well as being a great competition in itself I think this Royal Trophy is brilliant preparation for the coming season.

“If they invite me back for a third time I would love to be a part of it – but I think I’d prefer to leave the last green drama to someone else for a change.”

The eighth edition of the Royal Trophy will be held at the 54-hole Dragon Lake Golf Club set amidst the scenic mountain range and the pristine Dragon Lake in the outskirts of China’s third largest city, Guangzhou.

The Royal Trophy originated from the vision of the late legendary five-time Major winner Seve Ballesteros, the perpetual sixteen-kilogram solid-silver Trophy was graciously donated by His Majesty the King of Thailand and the competition is sanctioned by the Japan Golf Tour and the China Golf Association. Amongst numerous supporting organizations is the OneAsia Tour, the continent’s premier regional professional tour.

About The Royal Trophy
The Royal Trophy – Europe vs Asia Golf Championship is the official and traditional competition played between the two continents. The seventh edition of the Championship was held on 20-22 December 2013 at Dragon Lake Golf Club in Guangzhou, Guangdong Province in the People’s Republic of China. The eighth edition of the Matches will be held on 19-21 December 2014 and will remain at the 54-hole Dragon Lake Golf Club. The Competition features Asia and Europe competing in a series of 16 foursomes, four-ball and singles matches.